A 7-ton Ground Source Heat Pump Retrofit (horizontal loop field)--
In the late summer of 2012, a 7-ton ground source heat pump retrofit was completed at the 3,500-foot elevation in Plumas County, California in the northern Sierra Nevada mountains.  The existing 2,500 square foot home was previously served by a large capacity central oil furnace (with no air conditioning).  The home is two story and the occupants were dissatisfied with the significant temperature differences, not only between floors, but laterally along the first floor.  This hindered full use of the home's living space in the peaks of summer and winter climate.

The retrofit consisted of seven tons of capacity, composed of a split system 3-ton unit for the upstairs and a 4-ton unit for the main floor downstairs.  Both heat pump units share the same 7-ton loop field.  De-superheaters serve to pre-heat a buffer tank upstream from the hot water heater.  The equipment takes up a considerable space as a "mechanical room" in the garage, but it is more accessible than the slung, underfloor oil furnace it replaced.  If performance projections are correct, the cost of one year's previous heating oil will pay for three years of heating, cooling, and hot water consumption with the new installation.

The ground loop was built in an adjacent pasture too wet to support any future building construction.  Piezometric monitoring was performed in the winter of '07-'08 which (in a 67% of normal precipitation year) put the saturation level at 40" below the surface on 2/29/08.  The pasture's grass is mostly perennial species and remains green through the summer without irrigation; a feature unusual in this Mediterranean climate.  Five soil test pits were dug on July 6th.  Water was struck at six feet in four of them.  Digging of the main loop was postponed until July 23rd, when the trench excavation [six feet wide and six feet deep by 825 feet long] proceeded without moisture from below complicating the pipe loop placement.  During this delay, the header trench was dug from the edge of the home to the future header pit at the edge of the pasture.
Supply and return headers (1 1/4" diameter HDPE SDR-11) were buried in the header trench, whose total distance of 285 feet to the mechanical room came across 70 feet of crawl space and 215 feet of burial at a four foot depth on its way to the header pit where the main loops were dug in a modified "hair pin" layout.  This path was walked several times with a measurement wheel to come up with the desired run length, then both inside and outside trench boundaries were spray painted into the turf for the excavator operator to follow.  Across the bottom of the main loop trench's six foot width, seven 3/4" HDPE SDR-11 pipes were spread with roughly equal spacing and no overlap.

Supply and Return Header Trench--
Main Horizontal Ground Loop Heat Exchanger--
The header trench was dug by a backhoe with a 24 inch wide bucket, but the greater territory and volume of the main ground exchange loop called for an excavator with a 42 inch wide bucket.  Such a machine has more reach, power, and speed for removal, replacement, and compaction of the significant soil volume in this project.  A header pit was dug at the common beginning and end point of the seven pipe runs in this loop (about 5,800 feet of 3/4" pipe in all).

The ground loop trench took one day and about two hours the next morning.  A crew commenced unrolling the pipe coils immediately, and all were set by early afternoon.  Burial began, while pipe fusion at the header pit was completed.  Water was used to help with compaction that occurred during two lifts, and the pasture was returned to near normal by the afternoon of the third day.  Thus, the loop was secure from the mechanical room out to the loops and back by that time.  Photos below:
Photo Gallery of ground loop trench excavation and pipe layout.
Click on images below for larger views plus caption.  Use right arrow to advance to next image in close-up. 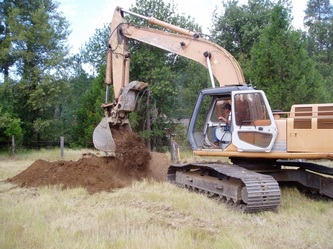 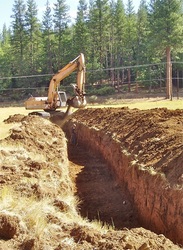 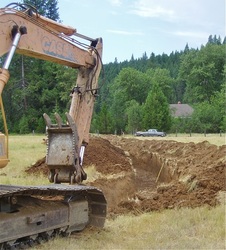 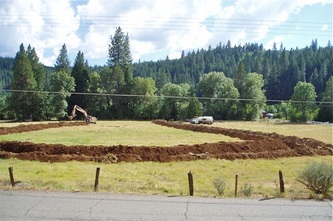 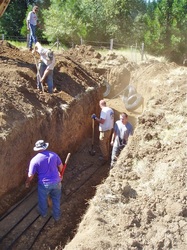 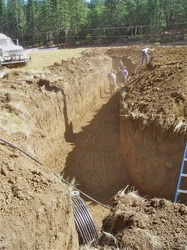 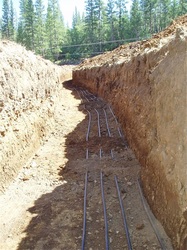 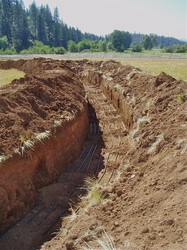 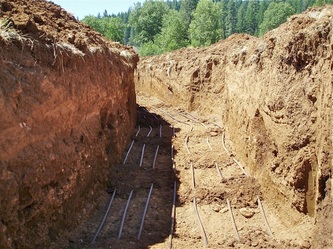 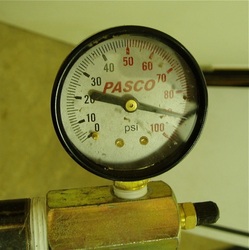 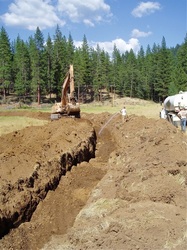 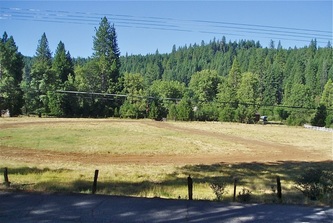 Inside the House and Mechanical Area--
With the header set and loop field complete and secured by burial, it was now possible to focus on the inside portions of this retrofit.  By their nature retrofits can be far messier than new construction.  Duct and pipe pathways are difficult and making alterations from what was there before can be challenging.

In this case, the old underfloor oil-fired furnace and all its ductwork were removed.  New ducting was installed and in order to get more air past the 4-ton heat pump's' heat exchanger.  To break thermal stratification, an additional air return was incorporated from upstairs to help feed the 4-ton unit serving the main floor.  To date, the result pleased the customer.

The completion of this system was by late August and that was early enough for the occupants to enjoy air conditioning for the first time ever in their home.  As we moved into the heating season, they have remained happy, now finding comfort in living areas that were previously avoided.