(Ground source) heat pumps
GSHPs are admittedly your Host's favorite renewable heat source.  They are operated by standard 240-volt electricity, yet are one of the least understood heating systems around—perhaps even less so than active and passive solar.  But they tap a "seasonal" solar collector and not a "daily" one.  Need heat on a cold, dark, snow-covered night?  No problem.  Your heat pump's ground loop is ready to go get it, 24/7, rain or shine.
When you measure the temperature below ground, you'll find it varies seasonally far less than air temperatures do.  Once you're 4-to-6 feet underground, the average annual soil temperature is at 52°F+ at a Colorado-Kansas latitude.  If you can harvest your BTUs from here instead of from cold, outside winter air, you'll gather more heat at less cost than air-to-air heat pumps.  Part of this efficiency improvement is also due to the greater rate of conducted heat exchange that comes from using fluids that are over 3,100 times denser in the ground loop than in open air.  GSHPs can deliver four or five times the heat of "old style" electrical resistance fixtures for the same energy used, and they can beat the best air-to-air heat pumps by 60%.  You might want to invest 10 minutes viewing one of the more complete and accurate videos on YouTube that was produced by Who Knows This Stuff.com.  To see a new window open to view this video, CLICK HERE.
In summer, it's far easier to push unwanted household heat into 70° dirt than to try to push it into 100° air.  GSHPs use a ground loop circulating a treated water fluid through high density polyethylene pipes to tap and concentrate underground heat or to offload unwanted summer heat.  As a technology it's simple, and all the mechanical parts have been around since air-to-air heat pumps came along in the 1950s.
Additional Arguments for Ground Source over Air Source Heat Pumps--
Both air source and ground source units gather and concentrate their BTU harvest or rejection for heating or cooling from the surrounding environment.  But that is where the similarity ends.  As seen in the graphical illustrations (just above and just below) ground source draws from and rejects to a better medium for heat exchange by virtue of the stability of soil temperatures 4-to-6 feet underground or boreholes far deeper than that.

An example:
In winter, the heating load is greatest at night.  This is a time when air source heat pumps must work harder to squeeze useful heat out of the air.  It would have been easier to at least go after that heat during winter daytimes, when the OAT (outdoor air temperature) would have been far higher; but there is no means of storage for this.  Under such a condition, the air source unit will have to run longer per BTU delivered and perform more defrost cycles of its outdoor fan coil (using even more electricity) because night OATs are wetter and colder.

The struggle by air source is avoided by ground source units in several ways; all of them tied to the phenomenon of utilizing the underground liquid loop.  The U.S. map (above) shows the stable mean temperature underground in soils, rock, and water.  This zone is a seasonal solar collector.  And the graph below shows that the temperature of underground territory is lowest at a point in the season that's far later than the climatic influence driving those temperature fluctuations.  Notice that at a five foot depth, the coldest soil temperature is reached on March 11th, well after the shortest day of the year (Dec 21st), and much later than the likely lowest OAT, (probably in late January or early February).

The ground source unit in winter will therefore only reach its greatest heat extraction challenge at a point in time when it will not have to run very long to provide the required interior heat needed on March 11th.  And, in contrast to air source, since the underground heat source does not experience wide daily swings in temperature, there is no penalty for attempting to draw heat from underground during the middle of a cold night.  The soil surface temperature influence (by daily highs or lows and the abundance / lack of solar radiation) takes approximately one week to move downward one foot.  After 20 feet, there is no change in the mean soil temperature (it will track the temperature contour map above).  And in the cooling season, every one of the helpful phenomena discussed (above) will apply in the same way—only in reverse.

Since ground source units don't work as hard as air source does (particularly on cold nights), they last longer, and draw less electricity per hour.  They work at the same efficiency over most of the heating or cooling season.  Since they last so long, the actual higher expense of a ground loop does not hurt, since ground source units have the lowest life cycle cost of ANY kind of heating/cooling unit on the market.
What's somewhat confusing is that this assortment of components to accomplish interaction with underground dirt has been around for only 25 years.  Not enough people know about it, and builders are less likely to recommend something with higher installation costs.  There are also systems which pump water from wells to a heat pump (open loop), returning it to the aquifer via an injection well.  A variation on this theme is pumping water from a pond or lake.  There are also underwater closed loops of coiled pipe heat exchanger, sunk into ponds or lakes.

Notice that the temperature levels of the black and green lines became equal and then reversed position in about late August.   Afterward, when the mean outside air temperature began to drop, notice that the entering loop temperature dropped far less quickly, although we know it provided more and more heat to the heat pump as the heating season began.

This graph's soil and air temperature behavior is consistent with the seasonal lag effect shown farther above where maximum soil temperature at depth occurs long after summer solstice's most intense radiation, and the coolest soil temperature at depth doesn't arrive until nearly March, long after the shortest day of the year.  This translates into the ground source heat pump being able to tap the loop most during the coldest months without radically lowering the loop temperature.  The same is true in reverse situation for cooling during the air conditioning season.  Greatest loop use then is not at a time of maximum soil temperature (which occurs into September), long after the hottest days.  Both of these situations boost efficiency of the equipment.

Look at the numerical spread between the green and black lines at the right edge of the graph.  If this were an air-to-air heat pump system, vaporizing the refrigerant to send to the compressor must be done with air that is 20 degrees colder than the 50° brine of this gshp's loop field.  That means the run time to satisfy the thermostat will be much longer with air-to-air heat pumps than with ground source heat pumps.  And the air-based heat pump is the only heat pump type that will need to go through defrost cycles, using even more electrical power.  Put another way, when your house needs heat your air-to-air equipment will not be working hardest during the daytime's highest air temperature, but during the lowest temperatures at night.  And if the air on a heating night is moist, defrost cycles will be more frequent.

One last point.  The instantaneous electrical demand made by ground source heat pumps is less than air-to-air models in winter or air-to-air models and standard air conditioners in summer.  This reduced demand is the result of simple physics, where the heat source or heat sink temperature differences that face the refrigerant's heat exchanger are consistently more favorable to ground source, year round.  This lowered demand is a utility favorite, meaning that more customers can be served with the same load profile.  That saves everyone money while delaying or halting the need for new electric supplies.  One claim by Oklahoma Gas & Electric is that for every ton of ground source heat pump capacity that's installed, .75 KW less electricity is required.  That means a common 4-ton unit would remove 3,000 watts of peak load.  During summer and winter peak usage, this is very helpful to extend the grid's capacity.
GSHPs  draw / reject  their heat  from / to  a variety of mediums in multiple ways 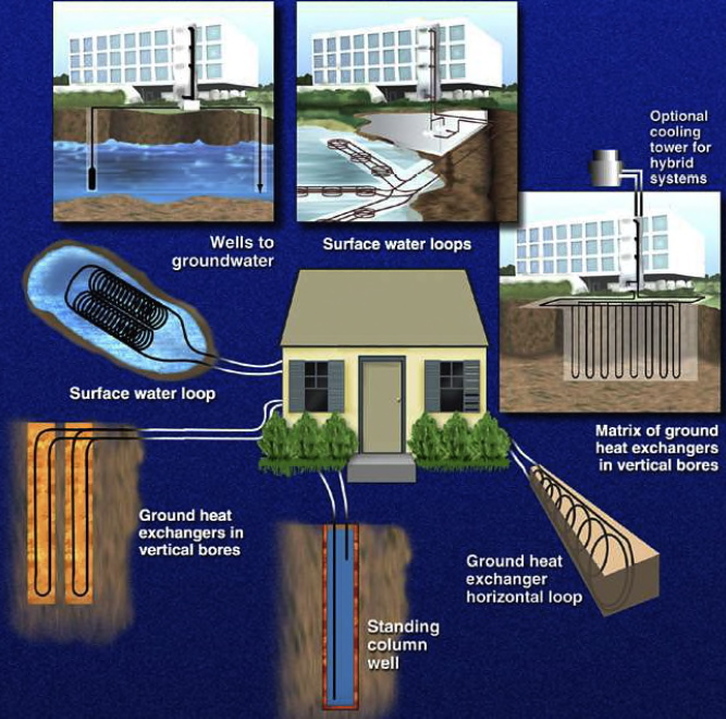 While GSHPs are extremely efficient, they do require 220-volt electricity.  And that attracts critics who ask why we should add another large, electric appliance. The truth is that there are beneficial offsets.  Electricity is the only energy medium which can receive a contribution from other sources of renewable generation—fossil fuels cannot.  So, when you're heating, the harvested ground heat is free and some of your electricity (let's hope its an increasing fraction over time) could come from a solar panel, a windmill, or a hydro installation.

And when GSHPs are in the cooling mode, they run at up to double the cooling efficiency (EER) of standard central air conditioners.  When you consider denser neighborhoods—dumping excess heat into the ground will cause less of a "heat island" locally than air-to-air cooling would.  This means that your neighbors' standard A/C units would not have to work as hard.  And the demand on your electric utility's delivery infrastructure is reduced.

Ground Source Design-Installation Standards --
A ground source fluid loop differs from air-to-air heat pumps in that all the air versions need to do is be parked outside in an open area, exposed to the atmosphere.  They move air to and through a fan coil heat exchanger (and Nature abhors a vacuum, so there's always plenty of surrounding air to grab).  But heat does not move through dirt or rock and into GSHP ground loop fluids as quickly as air can be sucked into the outdoor coils of the air-to-air jobs.  Water immersed coils have no problems with pipe contact or convective collection of heat.

There's a whole symphony of thermodynamics going on underground with GSHPs.  And it will only exist successfully "out of sight and out of mind" if the design and preparations insure that the amount of ground loop pipe will be adequate to supply the heating and cooling loads anticipated.  Obviously, we are back to the need for known heating and cooling loads of the structure served, the size of the above ground unit's (tonnage) and how much fluid must be sent to and from it by underground pipes in gallons per minute.

Vertical bores often end up in subterranean rock so their heat conductivity can often be very good.  Horizontal loops in straight pipe or slinky coils might end up in wonderful, wet "meadow muck" which is excellent for pipe contact and heat conduction.  Other, excellent soils are deep, rockless loam of fine particles that pack tight and insure good contact.  But beware loose gravels and sands, particularly if dry.  They are poor conductors and cannot hold water to boost soil density and therefore help conduction.  These are just a sample of the planning and engineering that must be considered for the ground loop installation.  The poorer the soil, the more pipe one must have to interact with it successfully for the transfer of heat.

For this reason, there are standards and certifications that help a consumer to be confident that his installer has explored the necessary details for a successful installation.  Below, please find two examples of standards for installation of GSHPs.