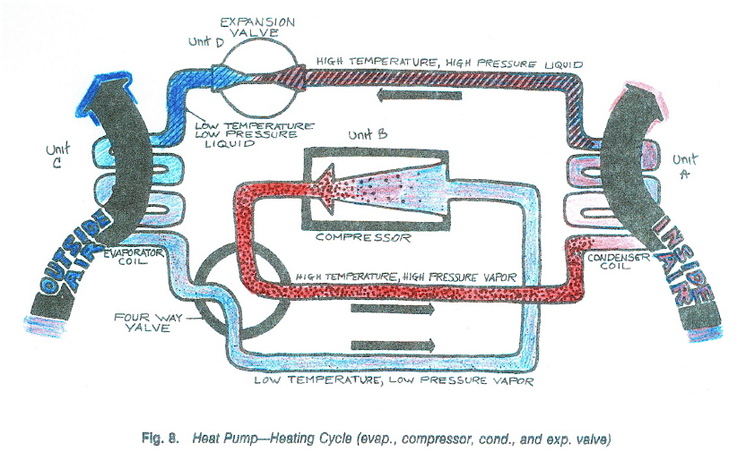 (Above) The heat pump refrigerant cycle with hottest, compressed gas in red and cooler refrigerant in blue
In case you're not familiar with the above, lets dispel the most common misunderstanding about heating with a heat pump in winter.  "Whaddya mean you're heating your house with outside 32°F air?"  Yes, we are.  If you understand that air can still exist as air below room temperature, then you can also grasp that air at 50° can give up heat as it goes to 40°.  The heat pump can perform this miracle by trying to cool the outdoors.  In doing so, it concentrates its thermal harvest into a refrigerant gas temperature that will support an air discharge at 88-95°F inside your building's duct system.

The second miracle performed by heat pumps is that this process can yield multiple times the BTUs (British thermal units) than could an electrical resistance heater.  Examples of resistance heating are toasters, plug-in heaters, baseboards or recessed heaters, and even those Amish fireplaces (over-sold on television).  A contemporary air-to-air heat pump can yield three times more heat than those examples while using the same amount of electricity.  And, they can cool as well as a central air conditioner commonly added to a fossil furnace  (ducted) heating system.  So, one heat pump serves both functions.

But (on efficiency) the ground source heat pump (GSHP) can leave the air-to-air heat pump in the dust.  This is because the temperature underground swings far less in its seasonal ups and downs than does the outside air, allowing GSHPs to work less for every BTU that's delivered.  And along with eliminating an outdoor fan coil (necessary for air source heat pumps), the ground source unit never has to run a defrost cycle, while operating on far less electrical demand while it's running. 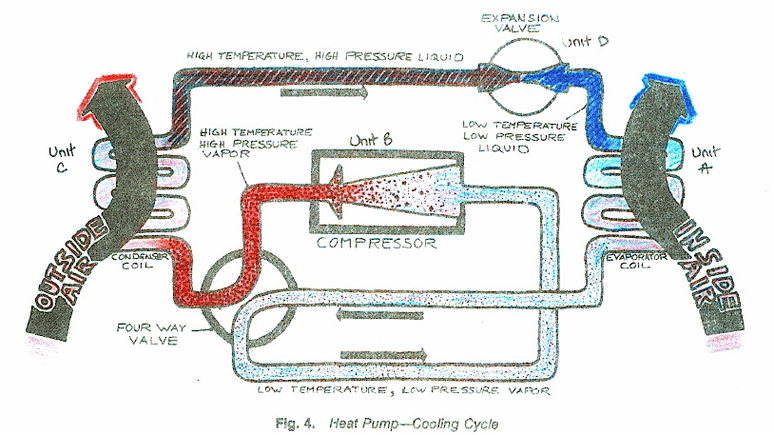 (Above)  The heat pump refrigerant cycle has changed function because of the 4-way valve, center left.
Refrigerant Compressors--
Part of the "heart" of refrigeration technology (including all heat pumps) is the refrigerant gas compressor.  In the images below, the anatomy of a two-stage compressor is shown.  Two stages means that based on the thermostat's call and the equipment's ability to meet that need, the unit may operate at either 67% or 100% of capacity.  This is true for both heating and cooling operation.  Longer run times at 67% (Stage 1) are more efficient than shorter run times at 100% (Stage 2), including less wear on the compressor.  Below, please find some static images and some video links that will show you how a scroll-type gas compressor is built and how it works.  Scrolls are the most common compressor technology today for residential HVAC use.  But newer designs are beginning to appear that run at wide variable loads instead of just the two described above, thus promising even higher compressor efficiency.  They are called variable speed compressors.
Still images of compressor inner workings
Click on any image in the Compressor Gallery below for a larger view and a caption 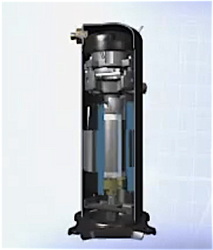 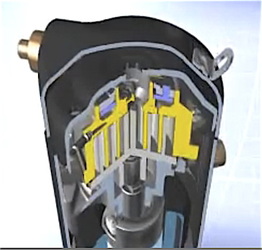 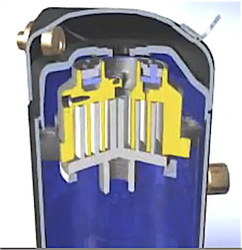 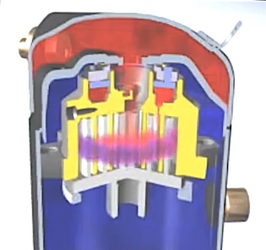 Heat Pump and Compressor Controls (by Thermostat)--
Thermostats respond to temperatures and temperature changes in order to send an ON-OFF signal to mechanical equipment.  Their historical roots are represented by temperature gauges that pushed a needle left or right on an analog dial face.  I remember my first encounter.  It was on the oven face of my mother's gas range.  Behind it on the oven side was a semi-open housing inside of which you could see spirals of bi-metallic coils.

Those coils would expand or contract in response to varied temperature in the oven, thus moving the needle on the outside of the dial.  We say bi-metallic coil because this coil was a fastening of two strips of dissimilar metals.  They were forced into a wound-coil arrangement by some kind of mechanical process.  Then, as the two kinds of metals in the coil were exposed to temperature changes, they expanded or contracted at differing rates.  The difference in expansion/contraction of the metals would cause the coil to wind tighter (shrinking) or force an (expansion) from an attempt to unwind.  Either motion at the outside end of the coil would twist a connecting shaft, levering the needle to a new position.  Temperature reporting devices and thermostats have come a long way since then.
The earliest thermostats were bi-metallic coil driven devices.  I remember many of them.  Once you got the outside cover of the thermostat off, they were right there, staring you in the face.  Appropriate to our heat pump discussion on this page, my 1977 heat pump installation had two bi-metallic coils controlling things, and that leads us to the discussion of multiple stages in heat pump operations—so let's go!
Most modern heat pump compressors operate in two stages (as illustrated on this page, above).  Stage 1 is low and Stage 2 is high capacity.  Thermostats (stats) "call" all heating equipment via 24-volt wire connections (and lately, wireless) signals for commands.  They measure air temperature and actually pay attention to the rate of temperature change (drops in temp during heating, climbs in temp during cooling) to start the equipment.  The number YOU dial in is called the set-point.  Stats will call Stage 1 to heating equipment when they read air temperature at a certain (programmed) distance from the set point.  Most would probably call at a temperature just above the set point for heating recovery.  If, in the previous 20 minutes they noticed your air temperature dropping quickly, they might even call at a somewhat higher point than that to let your equipment get a head start and avoid a big air temperature descent,  down through the set point.  [After all, this machinery is designed to preserve indoor temperatures automatically, so that you don't even notice your home's heat loss or heat gain caused by outside conditions.]

If a call has been made and the working heat pump is not able to return to the set point within an reasonable time, a call will be made for Stage 2 to help things along.  When the temperature at the stat reflects a suitable amount of recovery, Stage 2 will drop out and the compressor will be signaled to return to Stage 1.  When the temperature rises a programmed amount above the set point, the unit will be called to cease operation.  No more heat will be added, but the fan will continue to blow until the ducted airstream has no further heating benefit—then it shuts off (unless you have mandated that the ducted fan runs continuously).  These same operations will be found in the control of the heat pump for air conditioning, although a separate command will first tell the reversing valve to change position to send the indoor heat outdoors.

If (in heating) neither Stage 1 or Stage 2 will satisfy the stat, it will issue a command for Stage 3 (ouch, that's the call for electrical resistance "strip heaters" in the plenum to assist).  Resistance means you're making heat at only 3,413 BTU/kwh, but that's only for the portion that was added as boost.  This feature is present on well-designed air-to-air heat pump installations as well as ground source installations.  I say well-designed, because installing and operating a heat pump one tonnage size larger is very expensive compared to a few hours of Stage 3 on the coldest days.

Many heat pump users don't like strip heating and turn off the breaker that powers them.  In air-to-air models in their frequent ice de-frost cycle for outside fan coil equipment, those homeowners will be without heat when their stat calls for it, and they may get a jolt of cold, drafty air while the compressor and outdoor evaporator are idle.   Such users are not alone in failing to use the heat pump properly.  Others incorrectly pass the rumor that everyone should use a night time set-back to save money.  They may even feel sophisticated in thinking that the heat pump would work less at a lower stat setting during the cold night.  This is the wrong way to use a heat pump.  When the stat returns toward set point in the morning, the air temperature at the stat will be so far below the "new" set point that they'll be on Stage 3 for sure, for some time until things return to normal.  Those folks have just operated their heat pump as inefficiently as it could be operated.  Thermostats cannot protect against THAT.

Have you zeroed-in on the WHY? of my previous comment about TWO bi-metallic coils on my '77 heat pump?  If you tied them to Stage 1 and Stage 2 operation, you'd be right!  My unit did not operate at multiple capacities, but when the single stage compressor could not keep up, or the unit went into a defrost cycle, Stage 2 represented electrical resistance strips in my system.  The two bulbs were set at the factory to be two degrees apart as they sensed temperature.  If my heat pump couldn't stay within two degrees of set point, BOOM, here comes Stage 2.  And yes, I had many defrost cycles, but the strips worked perfectly.  To the human occupants of the home, no one noticed anything thermally different.  But of course I could tell by the difference in the sound of the outside evaporator that Stage 3 was temporarily in progress—because I am nerdy enough to do that.  Today's stats are all digital devices and far smarter than both the older stats and we occupants.

Back to TOP of Page--